What would a bunch of geeks do while their dorm highrise is under renovation? Build the world’s biggest LED screen, of course. 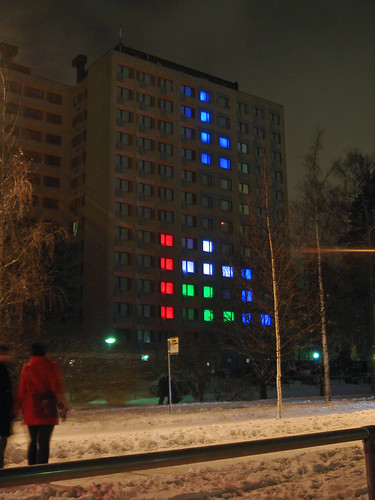 One of the most infamous student dorm houses in my hometown and whole Finland, Mikontalo, is finally put under hammer and renovated to meet the standards of the third millennium. While the construction work is underway, a bunch of TUT geeks decided to get something more out of the works:

The object of MIKONTALOLIGHTS is to create the world’s physically largest colored graphics platform by using the windows of Mikontalo’s D-staircase as light pixels. The platform is used to play Tetris and other games and present demos created by the students of Tampere University of Technology.

Here’s a video of the grand opening, including rounds of Space Invaders and Tetris (controlled with a mobile phone, of course). Times Square, beware!